2022
October
After 10 years of writing for MIDDLEWEB.COM about media literacy, my final post was published this month:
YA Graphic Novel Tells Family’s Holocaust Story

I was one of the authors for the School Library Journal Fall 2022 Dialog Day, answering questions about We Survived The Holocaust.

The current issue of Columbia Metropolitan Magazine profiles the Goldbergs, and references our new graphic novel.

August 2  I had the pleasure of presenting at the Edward M Kennedy Institute in Boston, for Project Citizen.
Yes, that’s an exact replica of the United States Senate inside the building. 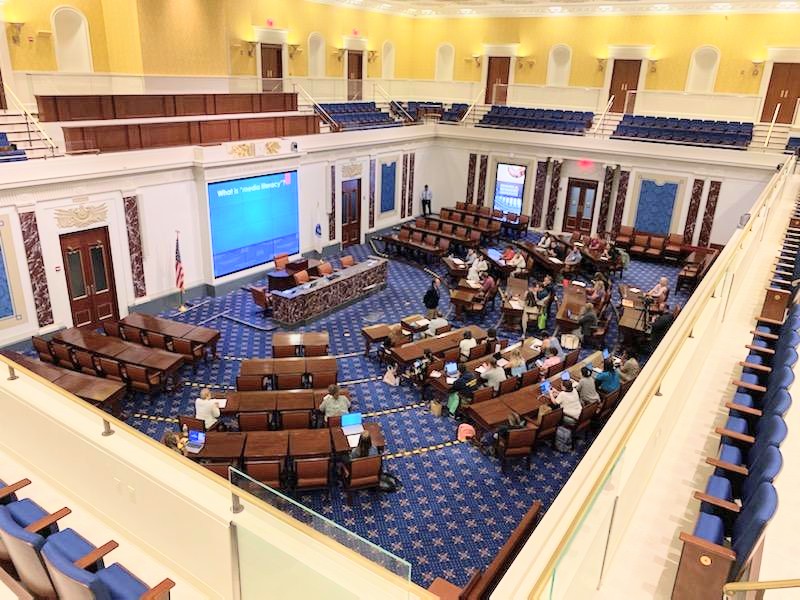 August   Teaching With & About the January 6 Congressional Hearings

July   We unveiled our new book website: We Survived The Holocaust

We introduced our graphic novel at the opening dinner ceremony of the International Assn of School Librarianship, meeting at the Anne Frank Center on the campus of the University of South Carolina

May
Every Student Needs to Know How to FactCheck (Middleweb)

April
12 Ways to Teach About the Holocaust (Middleweb)

Excerpts from my new book “We Survived the Holocaust” were published in The State newspaper (Columbia SC) on April 28, 29, 30 and May 1.

March
I was the sole guest of TIP Teachers during their monthly meeting March 9
I presented a program on media literacy at the Beth Shalom synagogue Columbia SC (March 2 and March 13)
I spoke to students about the development of our YA graphic novel during the USC class of professor Karen Gavigan, School of Information Science (March 31)

Middleweb publishes:  “War Breaks Out: How Will Students Get Their News”

I was a guest/expert on the RISE WORLD SUMMIT roundtable discussion “Infodemic & Media Literacy: The Problem Before Policymakers”

NCTE has republished my recent Middleweb blog: What Do We Want Students To Know About The Media?

I was interviewed (January 24) on the NEWSY news network about misinformation.

Here is a link to the talk I delivered on January 8 at Beth Shalom Synagogue, Columbia SC