Helping Students See Through & Read Political Advertising Messages By Frank W Baker
October 2019 (this blog post is scheduled to be published at www.MiddleWeb.com and may appear in a slightly different format) 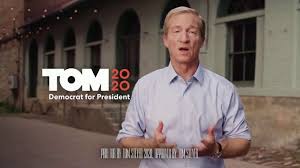 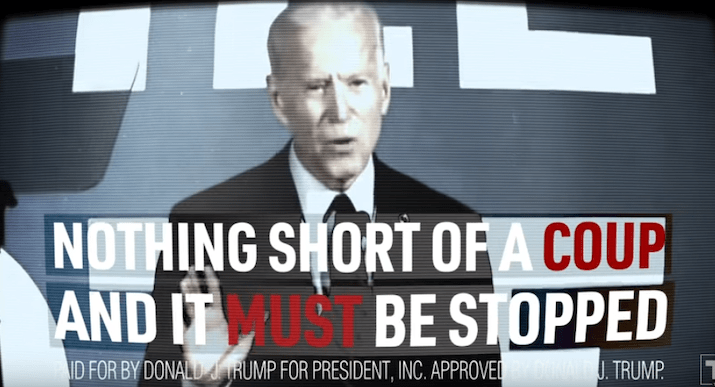 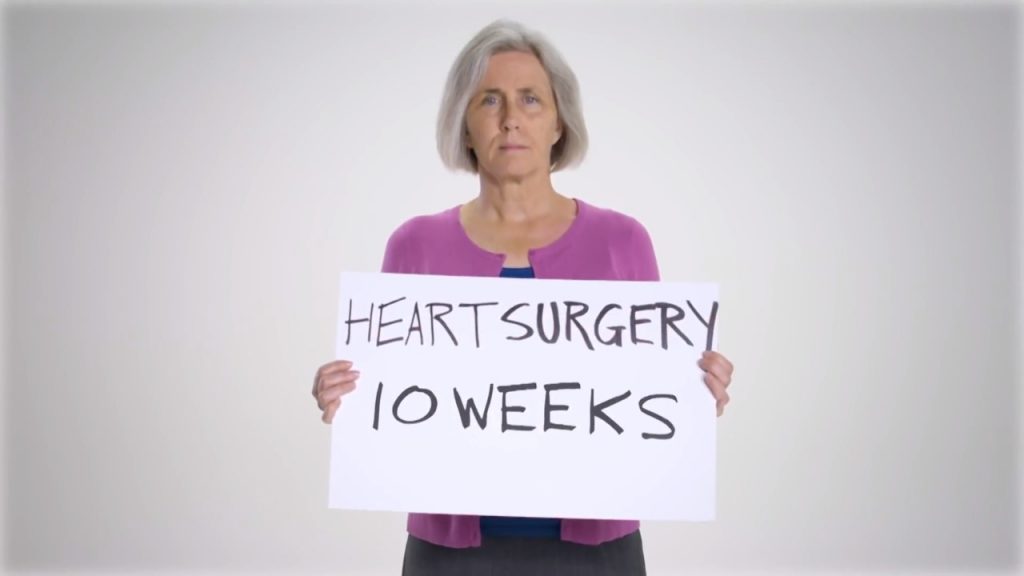 By now, you and your students may have already seen any one of a number of commercials for candidates running for office.  With the 2020 Presidential campaign heating up, no doubt you’ve seen ads from President Trump, one of the remaining Democratic contenders, or even an “issue” ad.

As a long time media educator, I am an advocate for using any one of these advertisements in the classroom to help students understand how persuasive messages are conveyed in 30 seconds (or less). It also provides a good opportunity to discuss the techniques used as well as the benefits and economics of TV.

Teaching Advertising
Whether you teach English, Social Studies or Media, using ads with students is a sure way to get their attention and to engage them.  They’re exposed to ads all of the time, but they’re probably unaccustomed to analyzing and deconstructing the words and images in these slicky-produced messages—important “media literacy” skills in the 21st century.

In a world where more states are teaching to the Common Core standards, would your students be able to identify the arguments put forth by the candidate or other sponsor of the ad?

So how do ads persuade:  through the words, images and sounds used. In the political arena, many candidates employ consultants to help them craft their messages.  In many ways, emotion is also used to sway voters. [ See my previous column on media’s uses of emotion.]

I’ve created a handy Political Advertising Analysis Worksheet, which I invite you to download and use with students.  Assign one of the columns in the handout and have students respond after viewing one or more ads.  Students are challenged here to think about (for example) what TV show they saw the ad.  The placement of the ad is important because the candidate desires to reach a specific demographic (for example: Females age 24-44). They must also recognize and identify symbols, sounds, persuasion techniques and more. 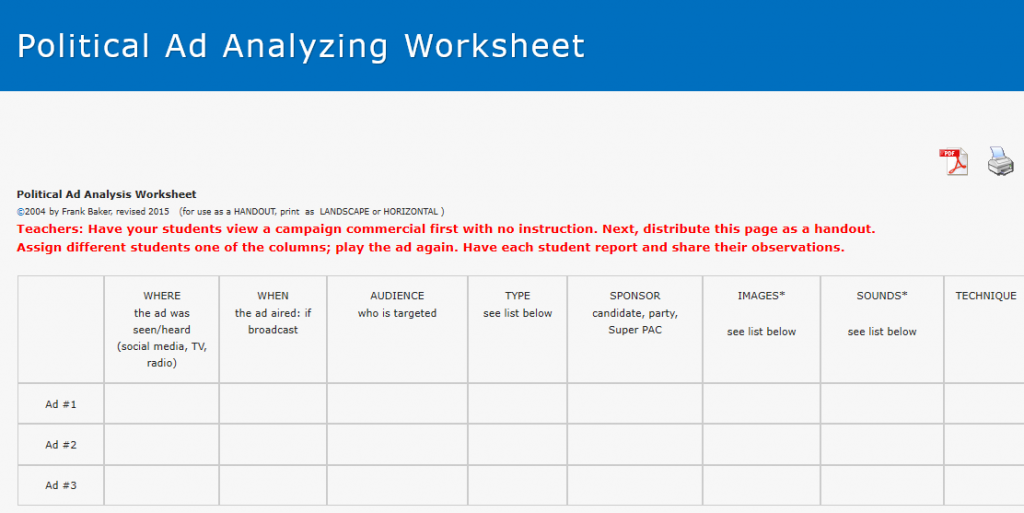 Activity Suggestion
This activity is aimed at assigning your students to write a 30 second commercial for a candidate.  With the names of Presidential hopefuls in a hat, students draw a name.  In a separate hat, place small pieces of paper listing any one of a number of various issues—like climate change, the economy, the Middle East, poverty, unemployment, etc.  Students select an issue and then research their candidate’s position on that topic. In addition to finding position statements on the candidate’s websites, they can also use a subscription database (i.e. EBSCO; General OneFile; InfoTrac Newstand) to determine what the candidate may have previously said, on the record, about that topic.

Using a 30 second commercial script template, downloadable from my website, they write the ad for their candidate. (NOTE: you can create your own 30 second script form by creating two columns on an 8 X 11 sheet of paper: labeling one column AUDIO and the other column VIDEO) Once completed, a representative stands up and reads the ad aloud and is timed, to make sure it is exactly half-a-minute long.

Who Benefits?
Another critical thinking question for your students to consider is: who benefits when politicians purchase time on TV stations and networks?  The primary answer here is: the media companies themselves.

I recently discovered a place online where your students can research exactly how much candidates pay to buy time on your local TV station. The Federal Communications Commission (FCC) requires stations to maintain political files. That’s where the actual contracts are placed for researchers, and others, like your students to download and study.

Here is the procedure for locating ad costs and contracts: 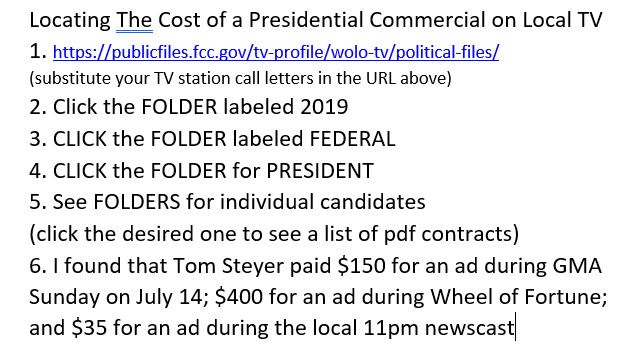 Again, you might task students, or groups of students, with researching a specific candidate or Super Pac. In addition to investigating your local station, you might decide to have them research TV stations outside your general area.  For example, candidates may be purchasing more ad time in states like Iowa, New Hampshire whose primaries and caucuses occur first. (NOTE: legitimate candidates, by law, must be charged the going rate for a 30 second spot. Super Pacs—not legitimate candidates—can be charged anything and your students may discover a huge discrepancy in the cost of a 30 second ad)

I recently presented the following idea to Social Studies educators gathered at their annual conference here in South Carolina, where I reside. I first showed them this slide. 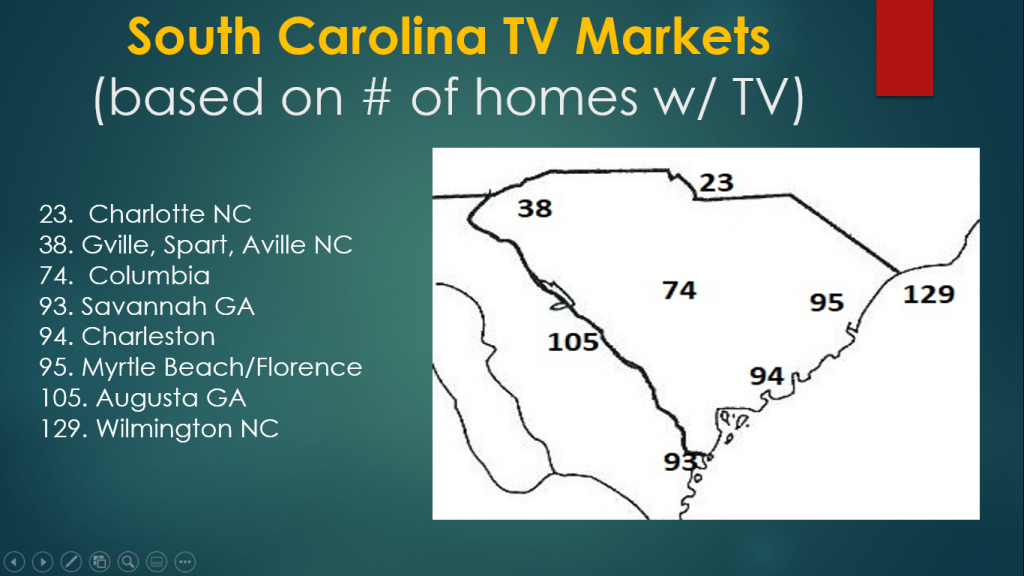 The numbers, adjacent to city names, represent the size of the TV market. The rating company Nielsen, assigns numbers. Those markets which have more homes with television will have higher ranks than those homes with fewer TVs.  I included markets outside South Carolina because those city’s TV signals cross over via cable and satellite. [Suggestion: create a state map graphic, similar to mine, to help students understand market size and ad pricing.]

One of the things students may discover is that the larger the market, the higher the cost of a 30 second ad.  Will students know why that it is the case?

Databases of Political TV Commercials
In 2019, there is no shortage of places online where you and your students can find, download, watch and study political advertising.  Here is a short list you may wish to consider.

Conclusion
The 2020 presidential campaign is upon us. Whether you reside in a “battleground” state or not, we’re all guaranteed to see (or read about) political ads which will bombard the airwaves as we approach primary and convention season.

We know advertising persuades and influences. When educators commit to taking the time to use these ads in instruction, and guide students through the analysis and deconstruction process, we’re helping them become better critical thinkers and viewers.

Frank W Baker is along time blogger for Middleweb. He was recently recognized internationally for his work in media literacy education with UNESCO’s Global Media & Information Literacy award.  Baker works with teachers nationwide to help them better teach media literacy and critical thinking about media messages. He is the author of the recent “Close Reading The Media” (co-published by Middleweb and Routledge) as well as “ Media Literacy in The K-12 Classroom,” (2nd edition, ISTE). He also maintains the popular Media Literacy Clearinghouse website of resources. He can be reached at fbaker1346@gmail.com and on Twitter @fbaker