We’re entering the homestretch of the 2016 Presidential campaign. Both sides are targeting their commercials at undecided voters as well as those who live in the so-called battleground or swing states. 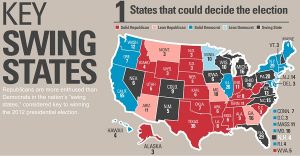 If you live in one those battleground states you’ve no doubt already seen TV spots for and against Donald Trump (Republican) and Hillary Clinton (Democrat). With less than three months still to go, you can expect to see a lot more.

In Ohio, a new art museum exhibit examines past presidential ads and images and the emotions that sway consumers.  “I Approve This Message- Decoding Political Ads,” opened in July and continues until Election Day November 8. 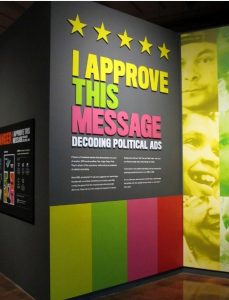 One of the goals of the exhibit is to use visual literacy as the lens through which we see and understand these persuasive ads. (Visual literacy also plays a large role in Common Core state standards as well as in art education.)   The exhibit’s designer says “we hope to unveil some of the most potent ways they (the ads) pull our emotional levers.”  (Source)

Media literacy involves analyzing media messages. Commercials are part of those “non-print” texts that the National Council of Teachers of English (NCTE) recommends. Both the National Council for the Social Studies and the Center for Civic Education acknowledge that political ads are worthy of study. Ads are everywhere and the current crop of political commercials offers you an opportunity to engage your students.

As a media educator, I recommend that you consider using past and current presidential commercials in your classroom. This is a perfect way to help your students understand argument,  the techniques of persuasion, as well as the techniques of media production.

Early in the campaign, Hillary Clinton’s first ad, “Family Strong,” introduced her to voters by addressing her mother’s influence. As she spoke, soft, pleasant music played subtly in the background. (Students might not notice that music on first viewing, so playing an ad more than once, and introducing those media production elements, is valuable for helping them notice elements they may have missed the first time around.)

How do color, music, editing, symbolism, camera angles and more contribute to the way we comprehend the message? Deconstructing these elements and helping students to analyze them are opportunities to insure our students understand the power of media to influence and persuade—critical and relevant in an Election Year.

If you’re reading my column for the first time, you should know that I have previously written about visual literacy and politics at MiddleWeb.com many times. Be sure to see:
Campaign Advertising: The Image Is Everything
Media-Visual Literacy and Presidential Politics
Campaign Ads: Helping Students Find The Truth
Media Literacy, Politics and Students

Curators of this new exhibit have  identified four key emotions used in previous campaign spots: hope, fear, anger and pride. They provide many examples from past campaigns. You don’t have to be inside the museum to see these ads, they can also be found online. 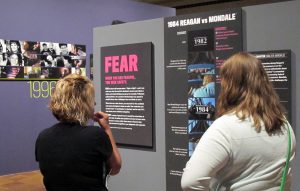 Top 10 Presidential Campaign Ads is a compilation video that showcases many of the ads in a short four minute video.

Another website offers a comprehensive listing of presidential TV ads: The Living Room Candidate is produced by the Museum of the Moving Image.  Here you’ll find ads listed by presidential election year.  Click on 1984, for example, and see the “Bear In The Woods” ad. Can your students tell which of the four emotions that one conveys?

The New York Times’ Ad Campaign website posts all of the current ads sponsored by the candidates & Super PACs.

Possible Assignment
1. Allow your students to choose one of the candidates or one of the Super PACS supporting that candidate.
2. Using news sources and the video site YouTube, have students download a recent commercial and create the transcript of both the words and the images used.
3. Task them with matching their spot with one of the four key emotions identified in the museum exhibit.
4. Have your students present their ads and their findings.

Questions for them to consider:
Which ads were effective?
How would they define effective?
How does the commercial make them feel?
What images or sounds were memorable and why?

Engaging your students in a study of campaign ads is a no-brainer. Whether you teach political science, history, art or media now is the time to consider how to help your students become more critical and media literate in their viewing.

Want to go deeper into this subject? Tell your library/media specialist to acquire my book: Political Campaigns & Political Advertising: A Media Literacy Guide  and let your Social Studies teachers know about my website: The Role of Media in Politics

Frank W. Baker is the author of “Media Literacy in The K-12 Classroom” and of the forthcoming book
“Close Reading The Media” (Taylor & Francis, 2017)