A Look Inside a Contemporary Televised Debate: What you don’t see

Dateline: Myrtle Beach SC
Here I am once again at the site of one of the nation’s presidential debates: this time the location is Myrtle Beach
Convention Center in South Carolina. The FOX News Channel, along with the SC Republican Party, sponsored this live
debate featuring the republican candidates for president. All of the candidates are here following the Iowa caucus and
New Hampshire primaries. Those races left no clear leader in the republican race for president, so all are hoping to do
well here. The media are also here in full force because this may be the last hurrah for some of the candidates who
must do well in SC’s GOP primary in order to move on.

Arriving mid-afternoon, I find law enforcement everywhere, controlling access into and around the convention center.
Having pre-applied for a press credential and now considered to be a member of the media, I was provided parking very
close to the convention center. Hoving overhead was a blimp promoting Ron Paul’s candidacy and a plane pulling a banner
which read simply Ed’08..a reference to a national initiative to put public education in the forefront of the political agenda.
En route to the parking lot, I passed more than a dozen local television stations’ satellite and microwave trucks. 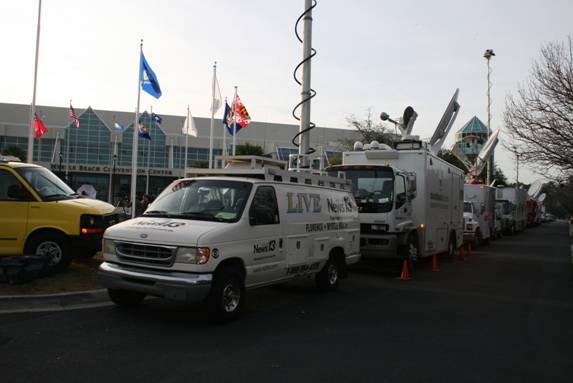 These vehicles are manned by engineering and technical experts (as well as reporters and photographers) who job
it is to deliver their advance stories from Myrtle Beach to wherever their television station is located. (Microwave is
used for short distances; satellite for longer ones.)  Various reporters were seen transmitting their taped pre-debate
stories back to the newsrooms, where they will be used during the early evening’s newscasts. Many of them also delivered “live”
reports during their early evening’s newscasts. Among the local TV stations was CNN, where I caught a glimpse of
White House correspondent Jon King pre-recording an interview with SC Governor Mark Sanford. 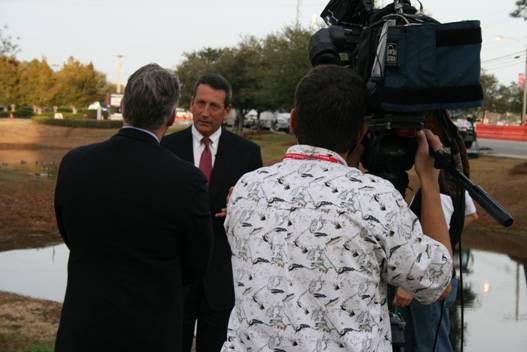 At the back of the convention center sat the huge uplink satellite dish which sends the video and audio signals
from the debate site to a geo-synchronous Earth orbiting satellite, then back down to FOX News headquarters
and from there to cable and satellite systems nationwide.  I was allowed inside the control room truck briefly to
witness technical production crews rehearsing for the debate and the post debate analysis program. 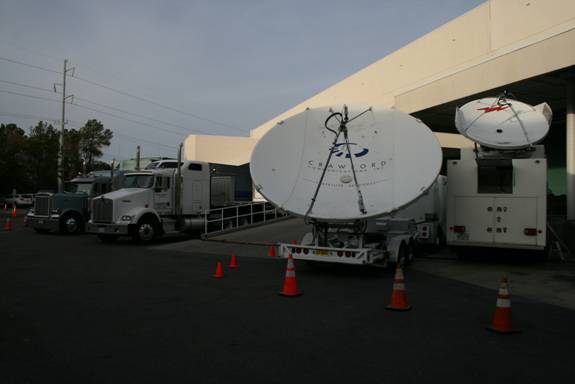 During the actual debate broadcast, the truck will be a hub-hub of activity. A director will call the shots from
the various cameras positioned inside the convention center. Some cameras will be focused on specific candidates;
others will be on the debate moderator. The director decides which camera shots get on the air. Along side the
director is a technical director.  Also in the control room are those responsible for the words that are superimposed
on the screen for the audience to read. All of the video and audio, go from the control room truck out to the big satellite dish. 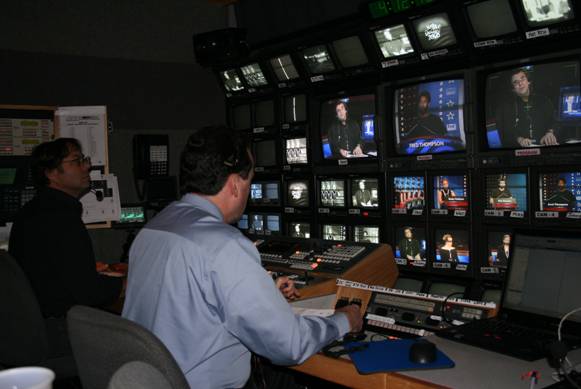 Inside the convention center, a ballroom had been set up for the more than 100 print and broadcast reporters,
photographers and bloggers who had gathered to cover the debate. The space is entirely WiFi capable so that
all have high-speed wireless Internet access to file their stories, transmit their photos, or blog. At the front of
the room, a large video projector displays the FOX News Channel’s signal. (Sprinkled among the news coverage
are various spots touting Myrtle Beach as a great vacation spot—let’s not forget this heavily viewed event is
also a tourism director’s dream come true.) Laptops, cell phones, PDAs and digital cameras are the tools of the
trade for most of these journalists. Prior to 9pm, the debate starting time, groups of people are comparing notes
and eating dinner.  As debate time draws nearer, the ballroom gets busier and louder. The big screen no longer
provides a feed of the FOX News broadcast but instead we are allowed to see the director running though the
various cameras shots he plans to use and endless repeats of the opening debate video. 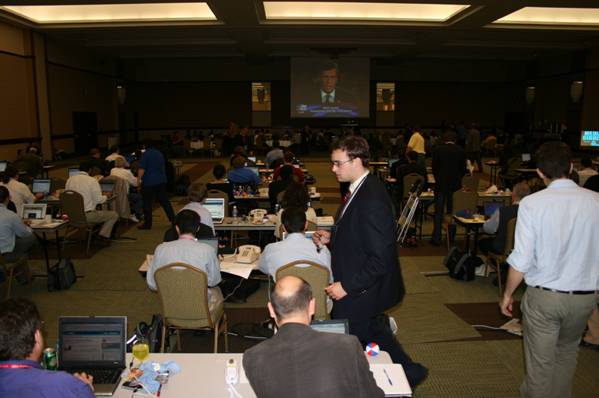 A Charlotte NC radio station, whose strong signal can be heard in both North and South Carolina, was
broadcasting live and had arranged interviews with both Governor Sanford and SC US Senator Jim DeMint.
Both were questioned about the race and South Carolina’s role in it. 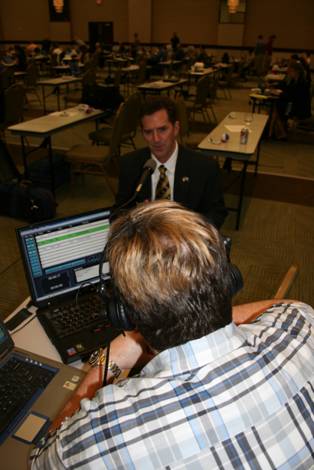 At 8:45pm all of the photographers were ushered into the debate set through the back doors in order to
capture images of the candidates on stage. This occurred because no photography is allowed during the
debate broadcast itself.  While we were led in, members of the audience (estimated to be about 3000)
were heard screaming out specific candidates’ names, which was followed by cheers for that candidate.
As the candidates stood patiently on stage, photographers jockeyed for position. About five minutes before
the debate was to begin, we were quickly led back to the media ballroom. 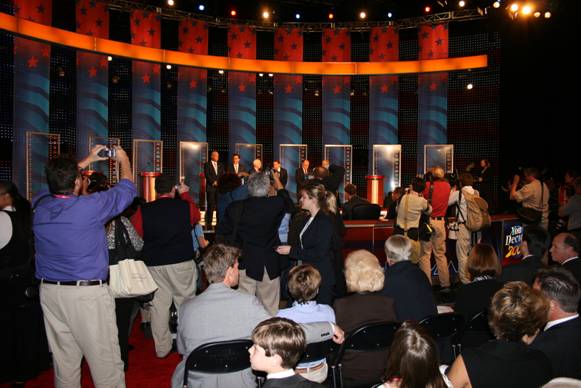 Now it’s time for many to transmit their images back to the home office. A news photographer begins the
process of selecting and editing photos he took of the candidates on stage. The photographer is also a “photo-journalist”
and is required to provide the caption that best describes the image. The photo and caption are transmitted via computer
and WiFi to his news organization. News consumers see these images in the morning newspaper, news websites,
or the morning TV news programs. 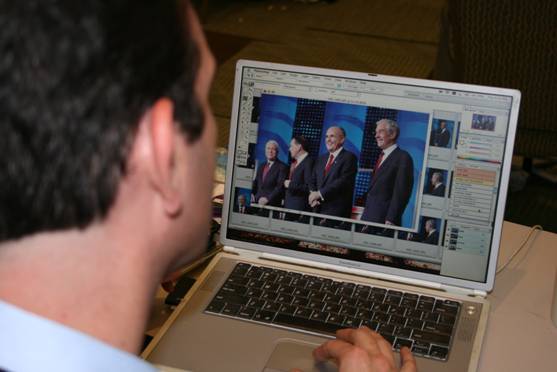 Following the 90 minute debate, reporters, photographers and others were ushered into the “spin room”—
a large space set aside adjacent to the debate location, where candidates and their surrogates met with the
media to provide background on analysis on the debate. The room was decorated with FOX NEWS and YOU DECIDE signs.
Spinning is a big part of debates: if a candidate said something misleading or wrong, he or his representative gets a
chance to set the record straight. Mitt Romney was the first into the room and the media swarmed around him. 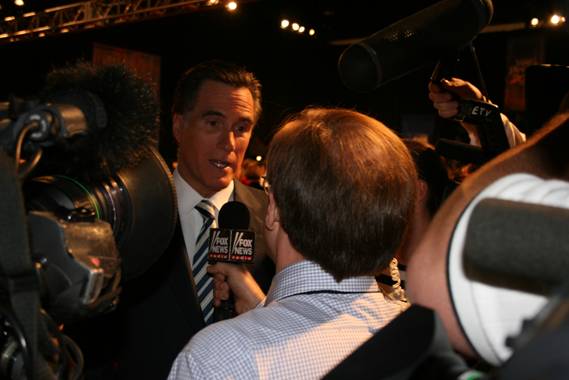 Hannity & Colmes program, which had constructed its set inside the spin room. Just
after I took this photo, I was not so gently bumped out of the way by a television news
photographer.

As candidates came off the debate set, they were ushered into the spin room to wait
their turn to be interviewed by the FOX co-hosts. 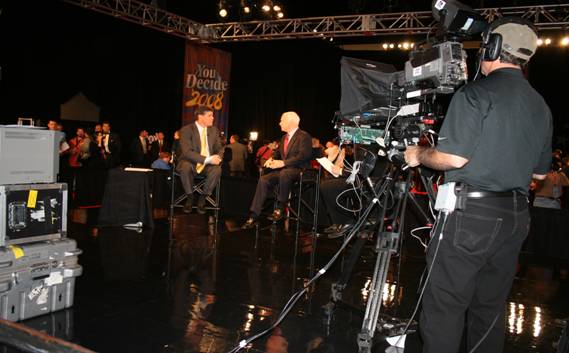