When you watch a movie, are you aware of everything the filmmakers are communicating? Sure, we all follow the dialogue and the action, but so many other elements—including lighting, camera movement, sound, body language, and costumes—convey meaning as well.

When the late film critic Roger Ebert first taught film, he always used film stills instead of motion clips, because he wanted his students to understand what he called “frame analysis.” Since many things happen on the screen at once, he surmised, we can better study it in still frames—which makes watching movies a more meaningful experience.

To understand how a filmmaker communicates, it’s essential to understand the tools of film (cameras, lights, sound, etc.) and the techniques that influence meaning. (The Common Core ELA standards make several references to these techniques and decisions made by directors.) For example, when a cinematographer chooses to focus on someone or something in the foreground (or background), that choice tells viewers what they want us to pay attention to. What’s in focus gets attention.

Technical experts spend their lives in specific areas of filmmaking. Using a Star Wars publicity still, below, I labeled various techniques to make it easier to point these out to students. 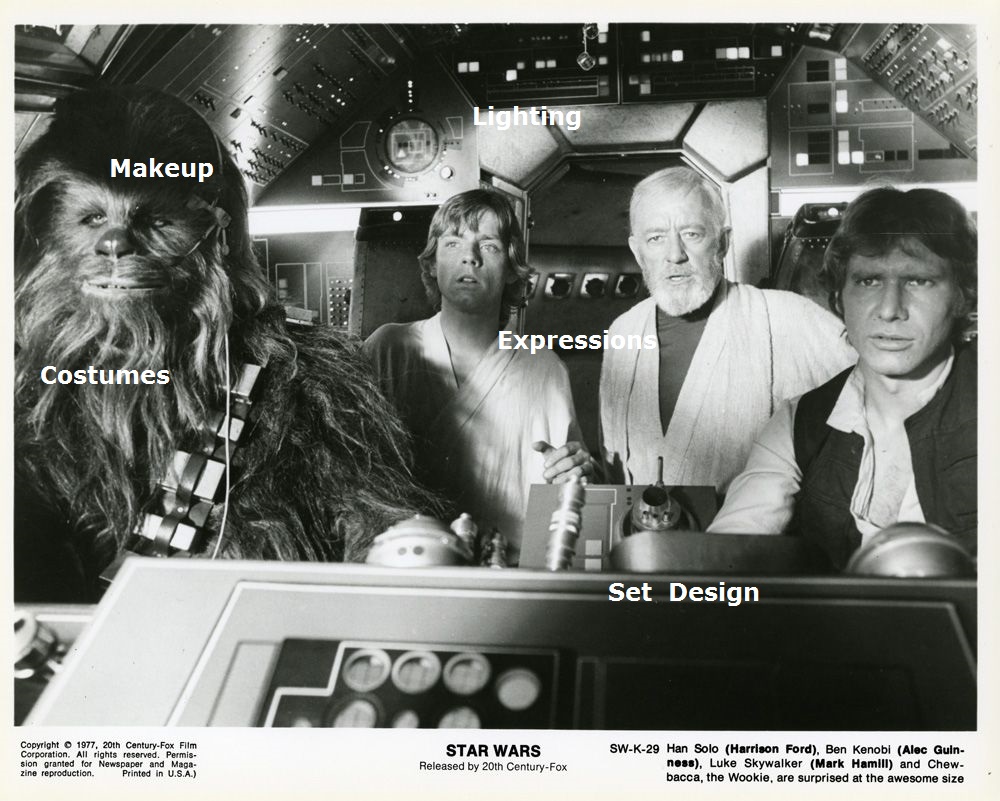 When we are first introduced to Simba, (below left) the lion cub, in Disney’s original The Lion King (1994), he is portrayed from above, as if the viewer were looking down at him. One rule of cinematography and photography says that this camera positioning makes characters seem weak and powerless. Conversely, when a character is viewed from below, as when Simba is an adult, (below right) the filmmakers communicate strength and power.

After teaching students that simple rule, educators can ask them to study similar examples of camera perspective in news photos and explore the effect. Teachers can extend this exercise by creating bulletin boards to feature more student examples of the “language of film.”

Take the example of a 2003 photograph, shot from below, of President George W. Bush standing on a stage at a Dayton, OH, Air Force base, where he delivered a major speech on the war in Iraq. 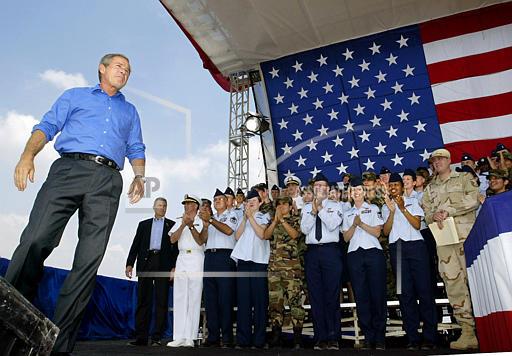 Educators can explore the photographic effect with students by asking: Where was the photographer positioned? How does the camera angle make the president look? And: What might President Bush’s expression mean or convey? What symbols are visible, and why do you think the photographer included them? What kind of reception is the president receiving, and what are the clues? Ask students to search online for photos from the same event showing the president from different angles.

Using a Google News image search, educators can find many photos that can be similarly analyzed and deconstructed.

Teachers who want to delve deeper into film literacy techniques can explore how lighting is used in To Kill a Mockingbird, how music communicates fear in Tuck Everlasting, and examine point-of-view in Toy Story and Over the Hedge. The Media Literacy Clearinghouse Language of Film website features news articles, lesson plans, recommended videos, books, and more.