I presented this activity: “All Media Start As Writing” at the Conference on English Leadership annual meeting several years ago.

The idea grew out of a news photo (below) that I have been using as part of my media/visual literacy workshops, where I get participants to react to the question I pose: what do you see. I have stripped away the caption, thus forcing the reader to do a “close read” of the image. (Close reading is a major part of the new Common Core standards.) 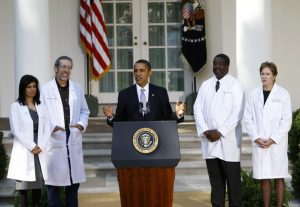 I get lots of answers, but mostly: Obama with doctors.  So then, I inquire: what clues tell you they ARE doctors, and everyone says the white lab coats.  So my next question is: did the “doctors” show up that day wearing their white lab coats, or did the White House distribute them? Everyone believes the latter.  So I have to remind my audience: none of us attended the White House Rose Garden ceremony that day and we did not witness this event. So honestly we don’t know the answer. Now the photojournalists are our eyes and ears at events: they document, but it is up to us to apply some critical thinking and visual literacy to what we see.

Now photographers are also known as photo-journalists because they have to document the event and they do write the captions which are delivered to the news agencies that run their images. (one of my points here is that the WH stages/choreographs events and it is up to us to question images)

So I located the White House video of the event (8 minutes) which I will show to participants, after which I will ask them to assume the role of journalists, photojournalists and caption writers.

Dividing them into five groups:
Group 1 will write the caption based on the image (above) and the video they viewed. I also have the WH transcript of the event, which will be disseminated.
Group 2 will write a caption to another photo, published in the NY Post, showing a White House staffer handing a coat to a doctor, who neglected to bring his. This group will also have the Post story critical of what they called a photo-op.
Group 3 will use the video and transcript to summarize the event in 15 seconds..as if it were a part of the five minute CBS Radio News on the hour broadcast.
This group will be required to read it aloud and will be timed.
Group 4 will use the blank twitter template (140 spaces) & the Washington Post version of the story to create a tweet about the event.
Group 5 will assume the role of a reporter for the Associated Press and they will have to create the headline to accompany the story they transmit to AP members

Upon completion, each group will share and be questioned. For example the twitter group will be asked to elaborate on the strategy they used to decide what was salient.