For years, ever since I first saw this commercial, I have been using this ad in my media literacy workshops.  We know that young people watch a lot of TV, and so, we know they are exposed to a lot of commercials, even though they may zap (skip) them.

Most of our young people already own mobile (cell) phones—they’re already connected. But if we ask these same young people: how was the cell phone first marketed? this question alone is a good backgrounder for what they are about to see.

Teaching advertising is a great way to infuse media literacy, critical viewing, and high order thinking skills into instruction. We know our students are targets for all kinds of products and services.  We know that advertisers use every trick in the book (techniques of persuasion) to make their products attractive, appealing and believable.  We also know that most students watch media passively. Media literacy, among other things, is designed to turn them into active (questioning) thinkers/viewers.

Introduction: For the most part, students have never been taught how to watch or deconstruct television. (For that matter, many educators have never had a minute of media literacy training.) This activity involves listening and viewing a commercial for cell phones. Students will be encouraged to look deeply and to ask questions about the production techniques used to make the commercial. (Most national and state standards for English/Language Arts include both “viewing” and “listening” so this activity can help educators fulfill those objectives.)

Pre-viewing questions  Students should be challenged with questions like:

Step One: first, ask your students to simply close their eyes while you playback the one minute ad. (click the image below to start the video ) 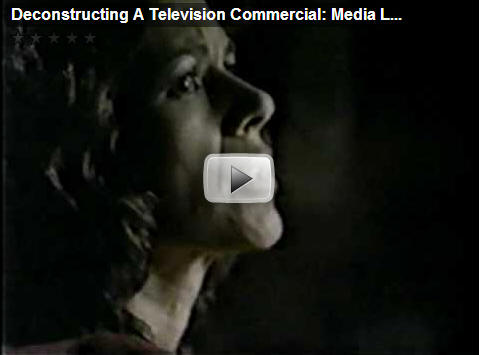 At the end of the minute, ask them to open their eyes and to write down everything they heard.  Now, why is this important?  Most of us are visual learners. Yet commercials are composed of both visuals AND sounds. ( A simple two-column script is how most commercials are formatted.) This exercise is designed to get them to think about the audio (sound) portion of what they experience.  Give your students about a minute to make their list.  After the minute, you should ask: what did you hear?  Be prepared to write their responses on the board, overhead, or WhiteBoard. Invariably, some students may have heard things in the commercial that others in the class did not hear.  For example, ask how many heard the wolf (or dog) howling?  For those who did not hear it, you can point this out in step two.

Step Two:  Be prepared to play the commercial a second time: this time allowing them to see it for first time.  Before doing so, ask your students this question: Other than cell phones, what else is being sold?  (This question is designed to get them thinking about how the creator of the cell phone ad used techniques to sell….fear, for example).  After the second viewing, ask students the question: what else is being sold? (Did they answer fear?)  Why would cell phone makers use fear to sell their products?  What techniques did they use to “sell” fear? ( student should think about specific words, phrases, sounds, music, etc. ) Can they think of any people who have used fear to sell products/concepts/issues/ candidates?

Post viewing questions
Introduce students to the “languages of television/video production”—these are the tools producers use not only to create media, but also to create meaning. Introduce these before proceeding to step three.

1. camera shots (where is the camera positioned? close-up, far away)

Lighting:   what time of day is depicted? What clues tell you so?
Music:      what types of instruments do you hear?
Sounds:   other than music, what other sounds are heard (e.g. female narrator, car cranking, sound of cars going by; dog (wolf) howl, etc.)
Setting:  where is the location? is it artificial or real? justify your response.
Post production: editing, what impact does it have?
Actors’ Expression:  other than words, notice how an actor communicates with facial expression, body language, gestures.

Step Three:  Playing the commercial again. If you have time, play the commercial a third time: assign groups of students to one of the languages of television/video production. They will be responsible for discussing the ad from their groups’ assignment.
Possible questions:
– how many close ups; medium shots, wide shots?
– why is lighting important? how does it help to set the mood?
– describe the music; does it remind you of something?
– how do sound effects contribute to the feel of this spot?
– what is the setting; how do you know; is it realistic?
– count the number of edits (the number of times the shot changes.) Students should count out loud.
After this screening, you might ask: what is the impact of quick edits?
– what non-verbal expressions are used that might reveal how she is feeling, thinking?
– What happens at the end of the commercial? Why do you think the producer of the commercial stopped it like that?  What do you think might happen next?
– Power: who has power and who is powerless in the ad? How does that make you feel?

Optional: have your students create the actual script for this commercial.  Download a blank script template here.  Ask students to re-create the script. In the video column they should make a list of each shot and describe it in detail. In the audio column, they should document everything that is heard.

For further discussion questions about this specific ad, go to page 64 of the document Literacy for the 21st Century