Here is something we rarely see: advertisers marketing to someone other than consumers: in this case marketing themselves to other advertisers. Unless you read trade publications, such as Advertising Age or Ad Week, you would not be exposed to or be familiar with these kinds of messages.

Frequently, advertisers promote themselves to media buyers and other advertisers in hopes those companies will want to advertise with them. This is a case in point.

When this ad campaign was unveiled, The Wall Street Journal, which also covers the media and advertising industries, noted:  “The ad uses the image of a fashionable young woman dressed in boots and jeans and listening to an iPod to represent the typical Oxygen viewer and an older woman clad in a less-flashy sweater and slacks to represent a Lifetime fan.” (Source: Oxygen Serves Up Air of Youth, March 22, 2010) Notice also how the younger woman is larger and placed on the right side, while the older woman is smaller and situated on the left.  The rainbow of sparkles, which includes diamonds, leads the eyes from the left to the right, while the words “all women not equal” is in a bolder font and larger than the other letters in the slogan at the top of the ad.  The color orange is certainly attention grabbing and provides a nice background to the contrasting words displayed in both white and purple.

The ad also uses vocabulary that some readers may not understand. For example, the ad says “If you’re looking for ROI, meet Ms. Right. The letters ROI stand for return-on-investment. So in this case, Oxygen is telling advertisers: purchase time by placing your ads in our programming and you will reach a more attractive (buying) clientele, who will in turn make purchases which will benefit your bottom line. .” (The word RIGHT has three meanings here: right=correct;  right= direction; right= her name.) 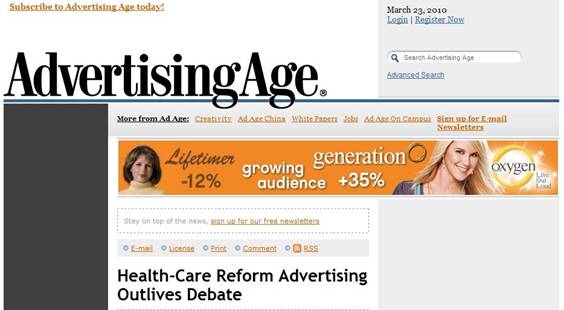 By clicking on the banner ad, you would come to taken to a full-page website (http://www.generationo.tv/index.html) with a larger version of the ad, including some words in very small font located in the lower left-hand corner. Here they are:

This (above) includes some language designed for the advertiser: it gives them more specific information about the demographics (age, gender, income level, etc.) that Oxygen is reaching and which they have presented in its ad campaign. Again this verbiage contains some abbreviations and codes that typically only advertisers see and understand.

1. Who created and or paid for this message?
We don’t know who created it, (we can assume an advertising agency did) but as far as who paid the ad agency: the bottom of the ad says that Oxygen is a division of NBC Universal.

2. What is the purpose of the ad?
The purpose is to showcase Oxygen’s attractive demographic audience

3. Who is the target audience?
In may be helpful to know that the annual “upfront” season is ahead—when networks pitch their schedules/shows to advertisers. (“The upfronts are an important annual event in North American television, during which television executives meet with advertisers, critics, and the press to talk about their planned programming for the next television season. By tradition, the upfronts are held in New York City over the last week of May.” Source: http://www.wisegeek.com/what-are-upfronts.htm)
So, the audience is other advertisers; people who read the Business section of the New York Times; other women.

4. What techniques does the ad use to get my attention?
The bold letters at the top of the page, the background color orange; the sparkling rainbow of diamonds; the cool looking young lady listening to her iPod

5. What techniques does the ad use to make the message believable?
Primarily the “us vs. them” type statistics; combined with the Nielsen Company cited as the source of the information found in the lower left hand corner of the page

6. What lifestyles are shown or promoted?
If you’re cool, like the young woman shown on the right side of the ad, then you should be watching Oxygen.  She has a happy expression, dressed in jeans, boots and she is an Oxygen fan, according to the ad.

7. Who benefits from this message?
a. The New York Times: they were paid to place the ad in the newspaper and the website
b. Oxygen: they get their message out to their intended audience
c. Nielsen- the company that generates the numbers for Oxygen
d. readers of the New York Times
e. the advertising agency which created the ad
f. can you think of anyone else?

8. What are we not told/shown?
We can surmise that the young woman on the right is not really an Oxygen fan; she is probably a model who was dressed to look “cool” and who was hired and paid to be photographed for this ad.

We don’t see how the advertising agency selected the slogan, the models, or decided how each element would fit on the page.

We don’t know the cost of a full page ad in the New York Times. (Previous advertisers  have paid between $60-$70 thousand dollars)

9. What is Oxygen implying by placing this ad in the NYT newspaper and website?
At a time when advertising agencies are starting to make ad purchases for the coming Fall TV season, Oxygen is trying to influence and persuade. The ad says think twice before buying time on the Lifetime network. It uses statistics in the middle of the page (and even more data in the lower left hand corner) to prove its point.