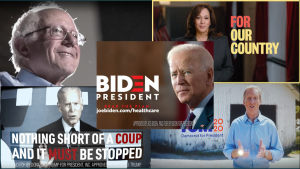 These are just some of the questions I sought to answer in writing the new book: “Political Campaigns and Political Advertising: A Media Literacy Guide.”

American Reference Books Annual (ARBAonline):  “The book is well researched and extremely well written. It is indexed for ease of use and provides ample citations to back up his findings and for further research. Baker’s authority is strong, and the work is free from obvious bias. The  photographs, charts,  and graphs are well rendered and add to the power of the book. The price is even reasonable. The amount of information presented would make this a great book for circulating as well as reference collections. It would be an excellent addition to the collections of large public libraries and academic libraries supporting programs in communication or political science, and is highly recommended.”

Research & Reference Book News’ review:  “Baker, a media literacy consultant and author, has written this media literacy guide for general readers who want more critical insight into propaganda and spin, political advertising and the role of new media technologies in election campaigns. The author uses clear and easy-to-understand language to examine and interpret the content of media messages in print, image and multimedia forms in an objective manner.  The author supplies both a timeline of the history of media in politics from 1913 to the present and a glossary of political and media terms.”

Midwest Book Review: “Politics and the media have been inseparable from the founding of our country down to the present day. In the colonial era media came in the form of local newspapers and printed broadsheet tacked up on bulletin boards and distributed by hand. Today media has evolved into the cybernetic world of the internet. In order to understand how the American political system works it is necessary to understand the fundamentally central role that media plays in all its various forms. That’s where “Political Campaigns And Political Advertising: A Media Literacy Guide” by Frank W. Baker (a professional media consultant and the webmaster of Media Literacy Clearinghouse) proves to be such a highly recommended addition to academic and community library Political Science reference collections. “Political Campaigns And Political Advertising” begins by defining the term ‘media literacy’, the concepts of propaganda and ‘spin’, the role of media consultants, the media categories of photography, radio, television, political advertising, campaign event analysis, and the new internet media applications and technologies. Of special note is the chapter focused on ‘Trying to Fix the Money Problem in Elections’. Enhanced with the inclusion of a glossary, a resources list, and an index, “Political Campaigns And Political Advertising” is especially commended to the attention of the non-specialist general reader with an interest in the role media plays in American politics today.”

TheWritingSite.org:  “This literacy guide offers students an opportunity to study the intersection of persuasive language and media through the lens of political campaigning and advertising. “It dissects the persuasive strategies embedded in the political messages we encounter every day in the media and demonstrates the importance of critical thinking in evaluating media ‘stories.’ Key concepts of media literacy are applied to political advertising in traditional media (newspapers, television, radio) and on the Internet, the new frontier of the political advertising wars. Dealing with blogs, social networking, user-generated web sites, and other electronic formats familiar to young voters, this lively introduction to the new world of political messaging appeals to readers’ affinity for visual learning as well as their ability to discern messages in text.”

Amazon.com reviewer:  “This is an excellent, easy-to-understand, well-illustrated book on political communications.”

ETC: A Review of General Semantics (July 2012) (The book) ” offers a history of the media and politics timeline (1913-2008), clear definitions and examples of how various media operate, helpful charts and graphs, chapters on visual literacy (including photographs, radio, and television), a glossary of political and media terms, ample citations to back up the author’s arguments—which are free from obvious bias, and more. Frank W. Baker, a media literacy expert and consultant, believes that it is important to possess a healthy skepticism when it comes to political campaigns and political advertising.” ” Thomas Jefferson said, “An enlightened citizen is indispensable for the proper functioning of a republic.” That statement by our third president is particularly useful to ponder today as there are many distractions in modern society that may tempt a person from seeking enlightenment in the civic arena. This book is a good antidote to such distractions and a useful primer for those seeking illumination on political matters.”


VISIT SITE
Get in touch
Important Links
© Frank W. Baker. All Rights Reserved. Built by Creative Open.
Get In Touch With Frank