What You See: Presidential Events October 8, 2013,   WH network reporters prepare to do their standups in the WH briefing room prior to the president speaking to the nation 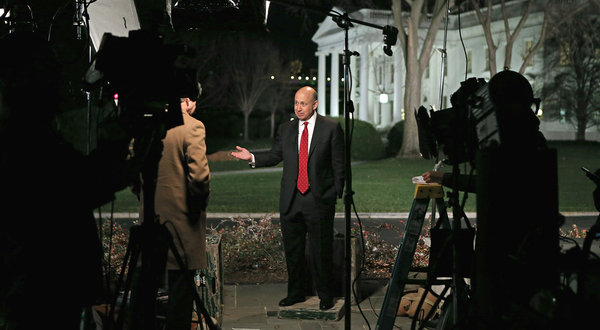 The president’s official photographer does his thing  (source) What you rarely see….a view from the back of the briefing room

July 13: (AP) President Barack Obama had just started a spirited defense of his economic stimulus plan
on Monday when one of his teleprompter screens came loose, crashed to the floor and shattered
into pieces.  The gadget’s fall surprised Obama, who uses a teleprompter during most speeches
and even brief remarks. The glass plate displaying his speech hit the floor in the auditorium of
the Eisenhower Executive Office Building, a massive building within the White House compound. Sometimes, the truest measure of a state ceremony is not the pomp in front but the stagecraft in back. And it only takes
a 180-degree twist to capture this flavor. Michael Euler of The Associated Press, a pool photographer at the Group of 8
summit meeting in L